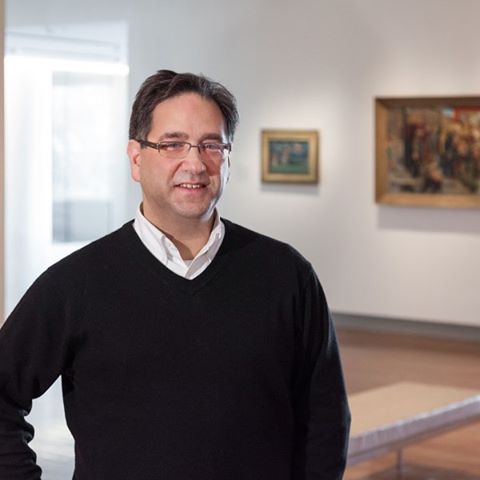 For our first lecture of the new “twenties,” January 22, 2020, we  hosted Dr. Leo Mazow, Louise B. and J. Harwood Cochrane Curator and Head of the Department of American Art at the Virginia Museum of Fine Art in Richmond.

He is a specialist in nineteenth-and twentieth-century American painting and cultural history.

Prior to joining the VMFA, Dr. Mazow was an art history professor at the University of Arkansas in Fayetteville.  From 2002 through 2010 he was Curator of American Art at the Palmer Museum of Art at Penn State University.  While there he organized a number of critically acclaimed traveling exhibitions, all of which were accompanied by scholarly publications including:  Picturing the Banjo, Taxing Visions:  Financial Episodes in Late Nineteenth-Century American Art and Shallow Creek:  Thomas Hart Benton and the American Waterways.

His book Thomas Hart Benton and the American Sound was awarded the 2013 Eldredge Prize for Distinguished Scholarship in American Art, presented by the Smithsonian American Art Museum.

In 2015, he held a Paul Mellon Senior Visiting Fellowship at the Center for Advanced Study in the Visual Arts at the National Gallery of Art, where he worked on his forthcoming book project: Hopper’s Hotels.

During our lecture, Dr. Mazow discussed his exhibit, Edward Hopper’s Hotel Consciousness, which ran during the winter of 2019 into February of 2020 at the Virginia Museum of Fine Arts, and actually allowed visitors to “check in” to fabricated rooms that replicated Hopper’s hotels, motels, tourist homes, and boarding houses.

Dr. Mazow is currently working on an upcoming exhibit,  The Art of the American Guitar.  He has a personal interest, since he plays the guitar with a band called the “Coverlets” that has performed in various museums including The National Gallery of Art, the Smithsonian and The Metropolitan Museum.

He did not bring his guitar to our stage, but maybe next time?  Many thanks to Dr. Mazow for a wonderful lecture!

(This lecture was organized by the Virginia Museum of Fine Arts and supported in part by the Paul Mellon Endowment and the Jean Stafford Camp Memorial Fund.)