William Middleton spent more than ten years researching and writing the story of two of the most influential yet intensely private collectors of the 20th Century, John and Dominique de Menil and his book, Double Vision:  The Unerring Eye of Art World Avatars Dominique and John de Menil  covers the joint biography of two family histories.

The scale of the de Menil collection is significant, over 15,000 works of art.  They collected everything from prehistoric to contemporary pieces.  And then they built a free museum so Houstonians, and, happily, the rest of us, could see it.

Mr Middleton is a journalist and editor who has worked in New York and Paris.  He has been the Fashion Features Director for Harper’s Bazaar and the Paris Bureau Chief for Fairchild Publications, overseeing W Magazine and Women’s Wear Daily.

Middleton grew up in mid-century Kansas with, as he referred to them, “Creative Parents.”  They believed in the importance of traveling and took him with them from an early age.  On his first trip they went to the Kasbah in Tangiers where he was told that he needed to stick with their small group because American boys and girls were often kidnapped, and he remember thinking why can’t I just go to Disneyland like other children?

He is currently living in Paris and working on his next book on the life of Karl Lagerfeld. 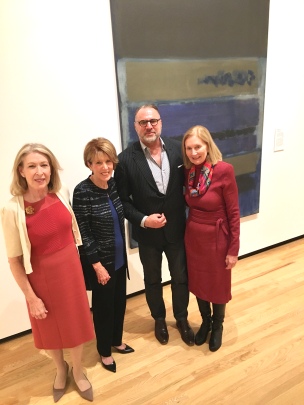 We welcomed him to Norfolk as our MABEL BROWN LECTURER on 23 October, thoroughly enjoyed his fact and anectodote-filled talk, and likely wore his writing hand out afterwards at a book signing.  All best, Mr. Middleton!